The official site of 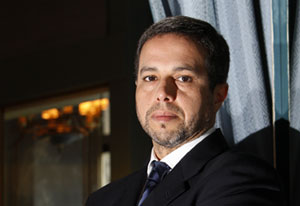 Prince Mohammed El Senussi Prince Mohammed, son of His Highness Prince Hassan El Rida El Senussi, Crown Prince of the Libyan Kingdom from 1956 to 1969, was born in the “El Dhahra” area of the Libyan capital, Tripoli, on 20th October 1962. He was no more than seven years old when the “notorious military coup” overthrew King Mohammed Idris El Senussi, King of a united Libyan Kingdom that had become a flourishing and developing country, and that had gained its independence on the 24th December 1951. The young Prince Mohammed watched tanks attack and surround his father’s house, and promptly arrested him. The soldiers led him away shouting that they had orders for his arrest from the leadership of the revolution! He then watched as other soldiers looted the contents of the house and destroyed some of its contents.

It was a difficult period for the Prince, his life had completely changed. He saw his father in prison before the revolutionaries were able to charge him with fabricated offences; he was wrongly tried, convicted and sentenced to three years.

The “soldiers” allowed Mohammed and his brothers to visit their father in prison once a week. Prince Mohammed believed that these visits to his father in those difficult times had a significant effect in forming his personality and deepening his outlook on life and people.

After his father’s release, his family was placed under house arrest for seven years where soldiers were present night and day around the house and in the garden. Every person who was permitted to visit the Crown Prince was thoroughly and meticulously searched. Passports and identity documents of his entire family were confiscated and Prince Mohammed said, recalling this difficult ordeal, that it was a process of complete isolation and stripping of identity.

Due to Gaddafi’s concentrated campaign of repeated lies and fabricated propaganda against the Senussi family, the family members were often subjected to abuse and insults from members of the revolutionary committees, and thugs who lurked among the passers-by.

His father’s house arrest was lifted towards the end of 1977, and in spite of all this isolation and persecution, many citizens deliberately showed respect to the family and many people from all over Libya came to visit the family. Whilst his father performed Friday prayers every week in the Idris Mosque in the centre of Tripoli, people would gather to shake his hand warmly and embrace him. This angered the revolutionary authority and drove it to issue an order at the end of 1978, banning the former Crown Prince from performing Friday prayers in this mosque and in the well known mosques in the city of Tripoli.

In February 1984 Gaddafi issued an order to burn down the house where the family lived. Dozens of members of the revolutionary committees and the intelligence service arrived at the house to break down the door. They took his father, Prince Mohammed, and all the family outside and made them stand aside and watch them set fire to its contents. They obeyed the order and watched as the fire destroyed furniture, clothing, and the entire contents of the house and the family’s belongings, including personal photographs and private papers.

In the same year Gaddafi also ordered the destruction of the Senussi Mosque in the oasis of Jaghbub in eastern Libya, the spiritual centre of the Senussi order. The revolutionary committees and the military division commanded by officer Hassan Ashkal Gaddafi destroyed the mosque and the tomb, dug up the grave of Imam Mohammed bin Ali El Senussi who had been buried there for 120 years, then took his remains and threw them into an unknown place in the desert.

The family continued to live in this atmosphere of fear, stress and suffering in Tripoli until 1987, when the Crown Prince became ill as a result of a stroke. Gaddafi believed that the end had come for this man whose survival had annoyed him, so he allowed him to travel to the United Kingdom, accompanied only by Prince Mohammed, to receive treatment. Eight months later he allowed the remainder of his family to join him.

On 28th April 1992, the Crown Prince died, and his family took him to Saudi Arabia for burial beside his uncle, King Idris, in the al-Baqi Cemetery in Medina. His son, Prince Mohammed was left as his successor and head of the family.

Prince Mohammed and his brothers carried the responsibility for the affairs of the family at a young age and had to work hard to contribute to support the family which the revolutionaries had besieged and persecuted. In the early eighties, he started working in the Libyan Ministry of Agriculture where his character of honesty and high ethics revealed itself, just as it did through the earlier suffering, the cruel life experiences, a result of the upbringing of a respectable family; the Senussi family from his father, and the Bakir family from his mother, daughter of a man of knowledge, statesman, professor, and scholar, Sheikh Tahir Bakir. From within this large house and amid this noble family Prince Mohammed emerged, a gentle man, friendly, decent and noble, having wide ranging relationships and friendships with the most distinguished Libyans. He was a lover of sports such as horse riding and swimming.

Prince Mohammed said: “I don’t like to see injustice and I hate people being harmed, the misery and suffering of others hurts me. This goes back to my harsh experiences and the events that happened to my family at the hands of the revolutionaries and the authoritarians”. Prince Mohammed stressed that “all people must live with dignity and must not treat each other unjustly or violate the lives of others”.